Argos has leveraged its 700-strong store base in a bid to create “a seamless journey” for customers, according to Home Retail Group’s chief digital officer Bertrand Bodson. This is something the retailer has arguably managed to achieve better than any other multichannel operator in the UK.

Bodson described mobile as “a connector between the virtual and the physical world” and claimed that 90% of all Argos purchases touch a store at some stage of the purchasing journey, emphasising Argos’s position as a truly multichannel retailer.

The convenience of being able to shop online and collect at an Argos store within hours has convinced increasing numbers of consumers to shop with the retailer using their mobiles.  Often customers order the products they want just before they travel to the store or while walking to the store, saving themselves time. Argos have a “real time” stock update using IBM Sterling, that is presented through IBM WebSphere Commerce. This enables customers to check stock before making a wasted journey.

Argos installed kiosks and click-and-collect points in its stores years before it became the top investment area across the industry.

Although the development and roll-out of this pioneering initiative stagnated for a while, boss John Walden kicked it into gear following his arrival in 2012.

The retailer’s reserve and collect service has grown since then to become a hugely efficient and profitable string to Argos’s bow, not only driving footfall into stores, but prompting more customers to order goods online and through mobile for in-store collection.

In keeping with Bodson’s emphasis on the interaction between digital and physical, Argos stores are now equipped with numerous fixed tablets for customers to use, while in-store staff have portable devices to assist further with orders. 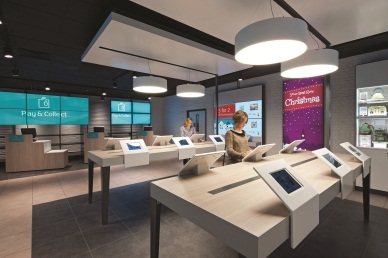 Bodson revealed that the journey between the virtual and physical world can work in reverse, “with the new in-store browsers giving a real sense of the digital experience” and encouraging customers to try it.

If the £1bn sales figure is anything to go by, that drip-feeding of the mobile experience into the minds of more traditional bricks-and-mortar Argos shoppers has paid dividends.

Argos’s unique model is blazing a retail trail, allowing it to cope with consumer demand and shift stock around its stores with relative ease.

The distribution network was designed to take advantage of the shift to online shopping, enabling same day collection of around 20,000 products. 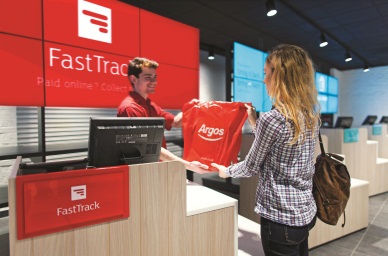 But the results are not completely positive. Following its full-year results in April, Argos said the network had led to increased sales at smaller spoke stores, although there were contrasting effects at its hub stores, where product availability, and consequently sales, suffered. 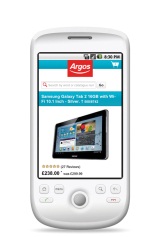 As far as having a customer-focused mobile app is concerned, Argos is once again near the top of the retail charts.

A string of features make it easy for shoppers to use, including firing up a local map every time you open the app to see where your nearest stores are, saving any previous product searches, swipe-ability between menus and large text to make orders easily visible.

It also provides detailed product images and descriptions, but more importantly, offers home delivery and click-and-collect options when purchasing. Before deciding on a delivery option, shoppers can bring up a list of product availability at their local stores and choose to either pay now or pay later.

An easy to use app is key in driving mobile traffic – and Argos’s has almost everything any consumer would need.

Argos’s Christmas Gift Finder proved a huge hit when it was unveiled in November last year, just in time for Christmas.

Winner of the BT Overall Award for Excellence at the Retail Week Tech and Ecomm awards this year, the app drew inspiration from mobile dating app Tinder, allowing customers to swipe their screens one way to save a product in a list, or swipe the other direction to discard them as unwanted. Each swipe contributes to improving the filtering system when consumers browsed online.

During its soft launch, the Gift Finder saw viral growth of more than 300,000 visits, 75% of which were on a mobile device. The average visitor spent more than three minutes looking at gift suggestions and swiped through more than 60 of the 6,000 available gifts per visit.

Arogs’s head of digital trading, Mark Steel, said the Gift Finder was designed to “make Argos stand out from the crowd in the mobile battleground.” There’s no doubt that with the uptake it received, it would have driven more customers into making purchases via their mobile devices.

One thought on “How has Argos Hit £1bn of m-commerce Sales?”